Are you one of the many Americans who believe they know the answer to the question What Is A Foreclosure? A quick poll of my friends and relatives showed that everyone I asked thought they knew, but only a handful could actually have the correct answer.

What Is A Foreclosure? A foreclosure can refer to two things. First, it is a five-stage legal process that begins when a borrower misses a loan repayment and if it gets that far, ends with the property being sold. Secondly, “a foreclosure” is often used to refer to a property which is going through this legal process.

In this post, I’ll be referring to both the process and the property, so let’s begin by taking a look at the legal process of foreclosure. 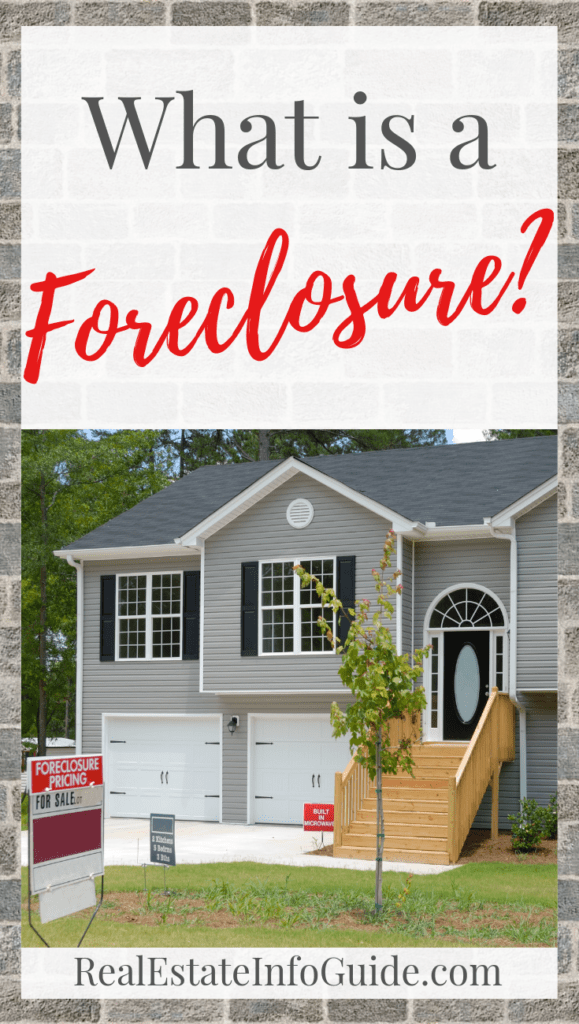 What Is A Foreclosure?

Fortunately, the majority of homeowners will never experience a foreclosure, hence the fact that the majority of us have only the vaguest idea of what the process involves.

The answers I received when asking friends and family what they knew about foreclosure included:

But these are some of the many common misconceptions around foreclosures, and the people who experience them.

The Language Of Foreclosure

Before we go any further I’ll clarify some of the terms you’ll be reading later. Trust me. It will help keep things clear when we get to the bones of the process.

A foreclosure is a multi-stage legal process. It begins when a borrower is late making their scheduled loan repayment. Once that repayment is late, the borrower is said to be “delinquent.”

When a borrower fails to repay the loan as specified in the original mortgage documents, they are “defaulting.”

Although the two terms are often used interchangeably, there is a difference.

Most lenders allow a borrower to be delinquent for a period of time, often known as the grace period, before considering them to be in default.

This is an important distinction because the second stage of foreclosure cannot take place until the borrower is actually defaulting on their loan.

The “grace period” varies from lender to lender and from mortgage to mortgage. However, it is always clearly stated in the mortgage agreement how delinquency will be handled and the time period after which you trip from delinquency to default.

Judicial Foreclosure Vs. Power Of Sale

There are two ways in which a foreclosure can happen, depending on the state in which the home in question is located. 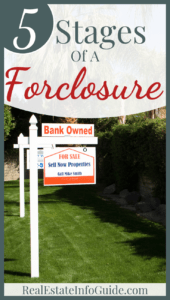 The Five Stages Of Foreclosure

So, now we’ve got that clear, let’s take a look at the five stages of foreclosure.

The process of foreclosure begins when a borrower fails to make a mortgage repayment at the scheduled time. Now, notice how I’ve said “borrower” and not “homeowner.” This is because legally speaking, the person who pays the mortgage does not actually own the home until the mortgage is paid off.

In addition, it does not matter whether the borrower has missed a payment intentionally or due to circumstances beyond their control.

Depending on the “grace period” detailed in the mortgage agreement, stage two usually happens between three and six months after the borrower first misses a payment and becomes delinquent.

At this point, the lender records a public notice at the local County Recorder’s Office. In this case, “local” means local to the property in question and not local to the lender or, if they ave already moved away, local to the borrower.

The notice is called either a “Notice Of Default” or a “Lis Pendens” depending on where in the country the notice is filed.

The detail of what happens o the notice is also dependant on location. In some states, the lender must attach a copy of the notice to the front door of the property while in others, this is not required. Other states require a copy to sent via by certified mail.

This notice is used to inform the borrower that they are officially in default and that all payments must be bought up to date. In addition, the borrower will be required to pay any late fees incurred as well as the lenders legal costs to this point. The notice will also record the date by which the borrower must make this payment to avoid the next step in the process.

The borrower and the lender now enter a period known as pre-foreclosure. This is the period after the Notice Of Default has been served, during which the borrower has the opportunity to make their payments or contact the lender to make other mutually agreeable arrangements.

Contrary to popular opinion, the majority of lenders are willing to work with borrowers and avoid moving onto the next step. They do not wait on the sidelines, rubbing their hands together gleefully, hoping to evict another borrower from their home.

Foreclosures can be lengthy, expensive, procedures which have no guarantee for the lender that they’ll recoup the outstanding balance. Lenders would generally prefer to avoid this, especially if the borrower is open about their circumstances and can make alternative payment arrangements.

If full payment is made, the process ends, and if not, it moves onto stage four.

Stage 4a: Preparing To Sell The Property

This step does not take place in power of sale states. Instead, they go straight to stage “4b.”

Assuming full payment, or other arrangements, have not been made by the deadline the lender, or the lenders representative will take the next step in the process.

In judicial foreclosure states, the lender or the lenders representative will file a lawsuit, in the county in which the property is located. This lawsuit must explain to a judge why they should issue a foreclosure judgment, giving permission for the property to be sold. The lender can also ask for what is called a “deficiency judgment.” This gives legal permission for the lender to sell the house for less than the total amount outstanding on the loan and hold the borrower responsible for the difference.

Stage 4b: Autioning The Property

At this point, in both judicial foreclosure and power of sale states the lender or their representative will set a date for the property to be sold at a foreclosure auction.  The lenders representative is known as a trustee, which is why these auctions are often referred to as “Trustee Sales.”

Before the sale of the property can go ahead a Notice Of Trustees Sale will be recorded at the local County Recorders Office and again, this is the office local to the property and not local to any of the people or organizations involved.

In the same way as the notice of default, the Notice Of Trustees Sale will be attached to the front door of the property and another will be sent to the borrower by certified mail.

The notice will also be published in the local newspaper.

In some states, the borrower can make the outstanding payments right up until this point in the process, even after the Notice Of Sale has been issued.

These “Trustee Sale”s or “Foreclosure Auctions” are occasionally held at the property itself, but it is more usual to find these auctions taking place at the trustee’s offices, a hired function hall, on the steps of the courthouse, and even on-line.

Unlike the issuing of the documentation, the auction does not have to be local to the property itself.

Properties sold at these auctions are “foreclosures.”

These bank-owned properties are often sold on the open market, through a local real estate agent or broker. If the lender has a large number of properties to sell at once, they may place them either singly or in bulk lots, at an auction house or liquidation sale.

While many of us think we know about foreclosures, few of us actually know much about the detail, unless we are one of the unfortunate few who goes through this process.

Lenders are not allowed to swoop in and “take back their properties” because the home never actually belongs to the lender in the first place. Not only that but lenders prefer to work with homeowners and get them back on track with payments rather than risk losing money by going down the path of foreclosing and selling a property.

Fortunately, foreclosures are becoming less frequent. In 2011 approximately 3.9% of homeowners were at some stage of the foreclosure process, while in 2017 that had dropped to 1.2%.

So, while a lot more of us can educate ourselves about the process, far fewer of us will have to go through it.

Which can only be a good thing. 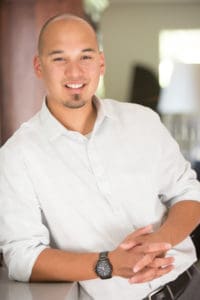