A popular way to give a facelift to a tired home exterior is to add shutters. However, as I say to our kids on a semi-regular basis – Just because you can do something doesn’t mean you should. So, if you were to ask me, Should I add shutters to my house? I’ll tell you the following:

Only add shutters to your house if they will be in keeping with the style of your home. If you do install shutters, make sure they are the right style, size, shape, and color for your home. In addition, ensure your shutters are correctly mounted with the proper hardware.

Making sure your shutters are correct is not a matter of taste, but more a case of not making a mess of your home’s exterior. If you add shutters to your home, they should enhance curb appeal rather than cause curb repulse. 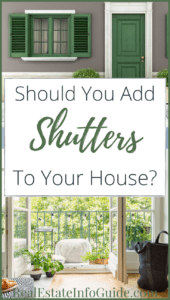 Should You Add Shutters To Your House?

You should not add shutters to the following:

If you do not have any o these types of window, the next thing to do is to ask yourself a few questions:

If your answer to the first question is “because I like them,” “because I have always wanted a house with shutters,” or “I think they will liven up the front of my house, make it interesting” then it’s probably a good idea to give them a miss.

But, if your home had functional shutters when it was first built, then it is a good candidate for shutters. So too are homes of a style that would usually have shutters, even if they are more modern builds.

It’s still not that simple. Shutters should be of a style and shape that is sympathetic to your house and windows. They must also be mounted in the correct position with appropriate hardware.

Anything else will look, at best, a little odd, and at worst embarrassingly awful.

So, how do you choose shutters that will be a fabulous addition to your home?

One of the most significant “crimes against windows” is the hanging of narrow shutters beside them. Few things look as obviously fake, like those skinny shutters that, if closed, would have no hope of covering the entire window.

Less frequent is the hanging of shutters, which are too big. They may be too broad, or they might be too tall. Either way, oversize shutters are just as much of an eye-sore as teeny-tiny super-skinny shutters.

When both shutters are closed, they should sit inside, and completely fill, the window casing.

Any other size shutter is incorrect.

Imagine a vertical line drawn down the center of your window. A shutter should be the same shape as this half-window. So, if you have a window that has a half-moon shape at the top, your shutters should have a matching curve.

You wouldn’t hang a modern glass front door on a log cabin. Hanging stylistically inaccurate shutters on your house is the same thing.

It doesn’t matter how nice the shutters you choose if they are the wrong style for your home.

Board And Batten Shutters

Board and batten style shutters are made of a series of boards linked by two or more battens.

These are the oldest style of shutter, and sometimes have a shape carved out of them for an additional decorative twist.

Louvered shutters come in two styles, fixed and adjustable. They are more frequently found in warmer regions where they provide shelter from the sun in addition to allowing airflow.

These shutters have raised panels on their surface and provide the most privacy and weather protection. The number, depth, and shape of the panels vary. If you are installing panel shutters to your house, ensure you use a period-correct style.

You’ll find plenty of advice on the internet concerning shutter color. The most popular recommendation is to paint shutters the same color as your front door.

When shutters were installed for practical purposes, they were not necessarily painted to match the doors. And you do not have to do this today.

As long as the color of your shutters is complementary to the other colors on the exterior of your home, they do not have to match.

Never install shutters by attaching them directly to the side of your home. There are three reasons for this:

Instead, mount your shutters to the window casing, with hinges. If your shutters are for purely decorative purposes, this will keep them off of the side of your house and also allow you to clean behind them.

Even if your shutters are not functional, consider adding the extra hardware they would need if they were. For example, shutter dogs, the S-shaped pieces that hold the shutters open. The addition of this tiny detail has a significant impact on how your shutters will look.

However, stainless steel or bronze hardware will stand up better to the climate in coastal regions.

Items such as latches, pull-rings, bolt, and other hardware can enhance the look of some shutters. But don’t forget that sometimes less is more, so don’t go overboard.

What To Do About Odd Spaces

Do you have a window where a shutter, if installed, would not be able to open all the way? For example, what do you do about a window on an upper floor where a shutter would lean against the chimney?

You could choose not to install shutters on this window, but if it is the only window without them, it might look odd. On the other hand, installing a single shutter on only one side of the window is even worse.

Instead, install shutters and mount the hardware so that you can have the shutter open most of the way. This type of irregular install will give your shutters a genuine feel.

If you find yourself with an odd spot where neither shutter has room to fully open, consider bi-fold shutters.

Shutters are a popular, affordable, accessible way to add interest to the exterior of your home. But just because you can add shutters to your house, it doesn’t mean you should.

If you do decide to hang shutters, equip yourself with plenty of knowledge so you can choose the right size, shape, and style for your home.

In addition, be sure to install your shutters correctly using the proper hardware. Even period-correct shutters of the perfect style for your house will look wrong if they are installed incorrectly.

There are many ways to get shutters wrong and end up making your home look odd, or even worse, cause damage, rather than enhancing its curb appeal. So, don’t rush into handing your hard-earned money over the counter at your local DIY store. Instead, take your time and make the right decision for you and your home.

No furnace or AC unit lasts forever and deciding when to replace yours can prevent major financial strain. How long does a furnace last until it’s time for a replacement? What about an air...

Before listing your property for rental, ensure it is in perfect condition and rent-ready to attract immediate occupancy. Optimum physical condition, working utilities, the right location, and...