According to figures released by the National Fire Protection Association, in 2018, the latest year for which figures are available, 2,720 civilians died in residential fires. That works out as an average of seven Americans dying in house fires every single day.

One of the most effective things you can do to minimize the risk of a house fire fatality is to ensure your home has enough working smoke alarms. But exactly how many smoke detectors should you have in your home? 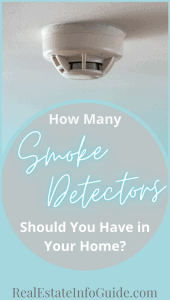 How Many Smoke Detectors Should You Have In Your Home?

The number of smoke detectors you need in your home depends on the size of the building, how many floors you have, and how many bedrooms there are.

At the time of writing the National Fire Protection Association recommends the following:

In addition, larger homes will benefit from snake detectors in each living space such as a den or study.

Where Should I Install Smoke Detectors?

When you install a smoke detector, whether it is in a room, a hallway, or any other part of your home you should, wherever possible mount the detector on the ceiling.

If it is not possible to place the smoke detector on the ceiling then it can go on the wall but it must be no more than 12 inches from the highest point of the ceiling.

This is because smoke rises. If your smoke detector is too low on the wall, by the time the smoke reaches it and sets off the alarm, you may not have enough time to get out.

Just to make things a little more complicated, there is additional advice about where not to place your smoke detector.

Where Not To Install Your Smoke Detectors

Avoid mounting a smoke detector in the following areas:

The reasons for all of these exclusions are threefold.

Dead air space is the name given to the areas of a building where air does not circulate freely. Until recently the standard advice has been to avoid mounting a smoke detector in an area of dead space. The theory is that smoke may be slow to reach these areas resulting in a delay to the smoke detector sounding the alarm.

As a result, avoiding dead air space is still appropriate when choosing where to place your smoke detector.

Smoke Detectors In The Basement

As a result, smoke detectors should be mounted on either:

Not every room has a uniform flat ceiling. Some homes have ceilings with recessed areas, others have ceilings that are pitched or otherwise atypical. In these rooms, there are additional considerations for the placement of smoke detectors.

In a room with a pitched ceiling do not put the smoke detector at the highest point.

Your smoke detector should be installed in the zone between these two imaginary lines.

While it is not always possible to take all recommendations into account when choosing where to place your smoke detector, every effort should be made to stick to the following guidelines.

How To Test Your Smoke Detectors

Test your smoke detectors once a month. It is a good idea to choose a specific date each month on which you will carry out the test.

First, let everyone know you are going to test the detectors. This will avoid anyone in your home panicking unnecessarily, carrying out the steps in your fire emergency plan, or calling fire rescue.

Next, get someone to stand as far away as possible from the smoke detector. They can tell you whether or not the detector can be heard clearly.

How To Maintain Your Smoke Detectors

Take a good look at your detector to ensure it is free from dust or other debris. If you can see any dirt, take the cover off and gently brush or vacuum the inside, replacing the cover, then carry out your test.

Even if the batteries in your smoke detector are working, replace them at least once a year. Many people choose to do this when the clocks go forward or back as this is a useful reminder.

Always test your smoke detector after taking off the cover and cleaning, or replacing the batteries.

When To Replace Your Smoke Detectors

If you test your smoke detector and it does not work after you have tried two sets of batteries, replace it immediately.

You Can Never Have Too Many

These recommendations are for the minimum number of smoke detectors you should have in your home. Fewer detectors and you may not have enough coverage to provide effective protection in the case of a fire.