As a general rule, most people outside of the property industry imagine real estate agents to be desperate to snap up every last listing they possibly can. After all, you only have to spend ten minutes on the internet, and you find countless articles telling you how unscrupulous agents are willing to do anything in order to secure a contract to sell your property. Consequently, few people ever consider the question Can a real estate agent refuse a listing?

In fact, yes, except in very few circumstances, a real estate agent can refuse a listing. Independent agents set their own rules as to which properties to list, or not, and those who work for brokers can refuse you outright or sign you up to the brokerage but refuse to work with your listing themselves.

Surprised? You’re not alone. Most homeowners assume that whichever agent they choose to sign up with will be biting their hand off in eagerness at the thought of listing their property. 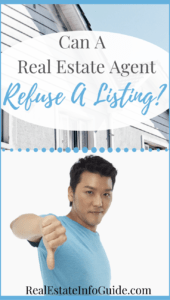 How Can A Real Estate Agent Refuse A Listing?

The majority of experienced real estate agents are either:

Independent agents supervised agents working independently, and independent contractors working with brokerages are all free to accept or turn down work as they see fit. Just as a plumber, builder, or other contractor is entitled to say “no thank you, I don’t want that piece of work,” so too can a real estate agent.

For some real estate agents working as contractors to a brokerage, there may be a clause in their contract which obliges them to pass the potential client to another member or contractor of the brokerage, but they would not be forced to work with the client themselves.

The small number of real estate agents who work in a situation where they have a traditional employer/employee relationship still do not have to accept a listing.  However, they might have to pass the listing to someone else in the brokerage, or “up the chain” to their manager. The manager could accept the listing and then ask the employee to work with the seller, but this would create a number of potential issues, so most brokers would not do this.

Why Might A Real Estate Agent Refuse A Listing?

The reasons why a real estate agent might refuse a listing are many and varied. It could be something as simple as they already have a large number of listings on their plate, or perhaps your property is too far away for them to want to visit regularly.

Other reasons may be to do with you, your property, or their own expertise. For example:

You Insist On Overpricing Your House

Homeowners, quite rightly, have the last word when it comes to the sales price they set for their property. Some sellers listen to the advice of their agents and set the price for their home at a point that is reasonable for the local market.

However, some homeowners insist on setting an unrealistically high price. In this case, if an agent were to accept the listing, they might find themselves with a property that is not going to sell no matter how much time and effort they put into the marketing. On top of that, a home that sits unsold on an agent’s books, and has many days on the market, reflects poorly on the agent, making them look like they are unable to sell.

That’s why an agent might refuse a listing for a home that the owners insist on overpricing.

You Have A Preset, Restrictive Showing Schedule

Some sellers decide before they even put their home on the market, that they will only allow showings at certain times, or on particular days. For example, one real estate agent turned down a listing because the owners said the house would only be available for viewings on Friday evenings.

The seller’s rationale for this was that they were away from home from Sunday evening to Friday afternoon and did not want viewings taking place when they were not there. In addition, they didn’t want viewings on Saturdays or Sundays as it was the only time they had to spend at home together.

I know it’s difficult to believe, but you may not be everyone’s cup of tea. If a real estate agent doesn’t think they are going to be able to work with you, even if it’s for as vague a reason as “I just don’t like you,” then they may well refuse your listing.

Are There Any Exceptions To A Real Estate Agents Right To Refuse A Listing?

Some states have legislation which protects additional traits. For example, DC has 21 protected characteristics listed in its Human Rights Act, including gender identity, political affiliation, and disability.

However, it gets complicated.

In cases where state and federal law conflict, federal law is applied, so some legal pundits argue that, in theory, only the protected traits written into Federal law count. They cite a recent case where the Supreme Court ruled in favor of a Colorado baker who refused to bake a cake to celebrate the marriage of a same-sex couple because of his own religious beliefs.

However, this ruling was made not based on any Federal/State law conflict. Instead, the court ruled that the Colorado Human Rights Commission was acting in a hostile manner when they suggested the baker was being untruthful about his religious beliefs in an attempt to circumnavigate the legislation preventing discrimination on the basis of the couple being in a same-sex relationship.

What Can I Do If A Real Estate Agent Refuses My Listing?

When a real estate agent refuses your listing, you can ask them if they would be willing to discuss the reasons why. If there is a specific issue that is preventing the agent from accepting the listing, the two of you might want to discuss this and see if you can come to a mutually agreeable solution that would make the agent willing to accept your listing after all.

If a real estate agent refuses your listing, in most cases, there is nothing you can do. Some people try to argue their point and force the agent to accept the listing, just because they do not like to be told no, but really, would you want to entrust probably the most important financial transaction of your life to date, to a person who does not want to do it?

The other exception is if an agent refuses to work with you because of your race, gender, or other protected status. In this case, you can bring an action under Human Rights legislation, but you would have to be able to prove that the agent refused your listing for this reason and not just because they didn’t want to take it.

In most cases, a real estate agent is at liberty to refuse a listing and is not under any obligation to accept you as a client or explain themselves.

The one exception to this is where the refusal of a real estate agent to take your listing, is a discriminatory act. While this is illegal, it may be difficult to prove.